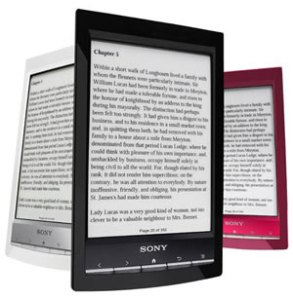 I’ve always been a fan of Sony products. They make the best laptops I’ve ever used, which is important to me because that’s what I work on. I have also always felt that they make good, high quality products. So I was interested to see this week that they’re releasing two new devices: the Sony Reader WiFi and the Sony Tablet S.

The new e-reader looks significantly thinner and sleeker than their previous models. It’s also got a touchscreen, and if you buy the black version you get a free copy of a Harry Potter ebook! Way cool, I say. It looks like it’ll have all the usual features of other current e-readers. There is no price posted yet, that I’ve seen, so that’ll be interesting to find out.

Their other upcoming offering is a tablet device. It’ll run on Android, so you’ll be able to use Aldiko for ebook reading on it. Engadget has posted a thorough preview of it. I was interested to read what they thought about the rounded thick edge that this device has on one side. They seem to have mixed feelings about it. Good review overall so I recommend reading it. The Sony website says that this tablet starts at $499, so that’s pretty much the same price as an iPad.

I can’t write any reviews of these products right now since I don’t have either one of them, so I mostly just wanted to let you know that they exist. I’ve also updated my Squidoo pages for eBook Reader Comparisons and Tablet Comparisons to include them.

This isn’t directly related to ebook software, but it is a followup to my recent post about Sony’s issues with Apple. As you’ll remember, Apple rejected Sony’s eBook App because it does not allow users to purchase ebooks through Apple (which would give Apple 30% of each sale).

Now, it seems that Sony is threatening to pull all of their music from iTunes.

“SONY has signalled it may withdraw its artists from Apple’s iTunes store and withhold its games from the iPhone in a sign the two companies are on the brink of all-out war.”

Sony plans to offer their music in their own system called Music Unlimited instead, which is already available in Europe and will be available in Australia soon. This is significant because Sony is the world’s second-largest record company, representing a large amount of artists, including Madonna, Michael Jackson, and Bob Dylan. If all of Sony’s artists were pulled from iTunes, Apple’s music market would be a very different place.

“The new Sony music service, which opened in Europe last year, will have a library of 6 million tracks and users will be able to stream songs to Sony TVs, PlayStation3 consoles, PSP portable game players and Blu-Ray players.”

Michael Ephraim from Sony was quoted as saying, “Publishers are being held to ransom by Apple and they are looking for other delivery systems, and we are waiting to see what the next three to five years will hold.”

No matter which side you take, this may end up being quite important in the history of online digital content delivery. As far as ebooks go — we are sure to see much of the market go to Android devices in the upcoming few years, and that will already be outside of Apple’s control. Apple may be left with their usual small fanbase for customers, while everyone else uses the more inexpensive options provided by Sony, Google, and Microsoft.

My RSS feeds are all abuzz today about how Apple has denied Sony’s app for the Sony Reader. It seems that Apple decided they didn’t like it because users could buy content through the app, and Apple would not get a share of the profit. This kind of blows me away because, as far as I can tell, other similar ebook apps like the Kindle and Nook apps have been doing this all along, and apparently it didn’t become a problem until Sony submitted their app.

I guess it was the straw the broke the camel’s back for them. Too many companies all trying to sell ebooks without giving Apple money for each sale, and they decided to suddenly change the rules on everyone.

Read more about this on Wired. Quotes:

Apple has responded to the furor over its supposed App Store policy changes that many believe could affect the popular Kindle, Nook and Sony Reader apps. The company claims it has not changed any of its guidelines given to developers, but it indirectly confirms that accessing content purchased elsewhere could be a no-no if that content isn’t also available to be purchased through Apple’s own system.

Apple also allegedly told Sony that the app couldn’t access content purchased on other Sony Reader devices, which is where most of the outrage was focused. Amazon’s Kindle app and Barnes & Noble’s Nook app are both popular mechanisms for users to download and read books that they have purchased from the respective stores. Many feared that this supposed change in Apple policy would take their e-books away from their iPads, iPhones and iPod touches.

Apple’s second statement indicates that this is indeed the case — sort of. If an app lets users access content that they purchased via Amazon’s website, for example, then that same app must also let users buy the same book via Apple’s own in-app purchase system. If the app developer doesn’t want to use Apple’s in-app purchases to sell content, then the app can’t access content purchased elsewhere either.

It seems that Amazon and Barnes & Noble will have to rework their ebook apps so that users will somehow buy the content through Apple, so that Apple gets the 30% that they charge for content purchased through iTunes. Eh … I’m not even going to try and rewrite the details. Check out the article in Wired, linked to above. I’m sure we’ll be hearing more about this soon.